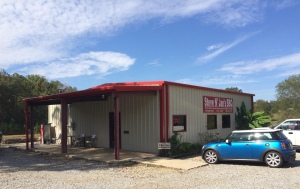 I’ve a tendency to slip away as often as possible when food is involved.

And, Bar-B-Que calls to me like no other!   Steve N’ Jan’s BBQ is one of those little out-of-the-way places that folks don’t necessarily know about -unless you are a local, that is.  It sits out in the country, on roads I don’t even know the name of but drive daily to and from work -just so I can see the lolling hills of Alabama farmland, old barns and recently baled hay.

I pulled in and parked; opening the car door I was immediately engulfed by the smell of smoked meats!

Daily, I join 400+ students for lunch in our school cafeteria.  My schedule doesn’t allow me to get out and about and until this weekend, I’d not had the opportunity to slip away.  When I arrived, Shelly (Steve and Jan’s daughter) greeted me with a huge grin and was more than happy to recommend everything on the menu!  Steve was busy behind the counter chopping meats while Jan flitted about, being gracious and refilling everyone’s sweet tea.  Last summer, Steve N Jan’s BBQ won The Taste of Lincoln.  I’ve been ready to dig in ever since!

Shelly stood and chatted with me while I looked over the menu.  When I told her I was having a difficult time choosing she smiled and suggested, “Why don’t you go grab yourself a milkshake and come back at 4:00 when we put out the buffet.  That way you can sample everything!”  I raised a skeptical brow and asked if she was kidding.  “I’ve never heard of a BBQ buffet!  But, I’m too hungry to wait and I’m ordering a lot…” I warned, returning her smile.

I told her I wanted to start with the BBQ Nachos.  She grinned, and headed off in the direction of the kitchen.  “I’ve got something I want you to try,” she said over her shoulder.  “We make the most amazing potato salad -but it doesn’t have any of the regular potato salad ingredients,” she explained.  “Dad also makes a Loaded Baked Potato that starts with this as the base.  He warms it then stacks it with mounds of cheese and BBQ.”  She slid a plate of warm, pork rinds across the table too, telling me that they make these as well.

My mouth was watering for the BBQ, but after one bite of the creamy red potatoes, I only wanted more.  I’d say there will probably be a time in the near future that I’ll show up for just these, but it would be a lie.

The nachos are amazing as well! 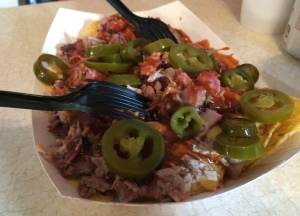 As are the ribs…

And the onion rings…

But the best -or at least the best thing I had this weekend- was the 5″ Pork BBQ Sandwich, pilled high with extra meet and loaded with pickles! 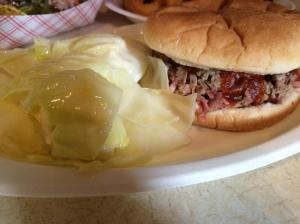 I CAN HEAR WHAT YOU ARE THINKING 😉  Yes, much- MUCH of it went home in a to-go box, or two!

I’ve every intention of returning this coming Saturday for the buffet.  The granddaughter, Elizabeth Rileigh, is a BBQ baby & is always ready to go out to eat!         Love Brisket? They have that too 😉

Before heading out, I got to talk for a few minutes with Steve.    He gladly discussed his love of cooking and smoking meats, explaining too how he refused to postpone his dream until after retirement.  The restaurant has been open for four years.  Following retirement this coming year, he will begin opening some during the week.

Hours of operation for Steve N Jan’s BBQ are: Friday and Saturday from 11- 8 p.m.  *Buffet is ready at 4:00.  They open on Monday, Tuesday and Thursday for special occasions. Catering for important events is also available. *They are NOT difficult to find and instead of giving you typical Southern directions (i.e. take the road in front of the schools, go past the big house, the old farm with the beautiful pasture and hang a right at the church…) I’ll just give you the address.  You are Welcome!

You can join me there as well!